1) The Man Who Knew Too Much

2) The Wisdom of Father Brown 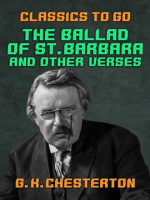 3) The Ballad of St. Barbara (and Other Verses)

4) The Selected Tales of Father Brown

5) The Absence of Mr. Glass

Author
Chesterton, G. K
Language
English
e-Book
Show Edition
Digital Items: Available Now
Checkout on Hoopla
Source
Hoopla
Digital Items: Available Now
More InfoCheckout on Hoopla
Description
Read Description
The little clergyman called Brown thanked him with unquestionable warmth, but still with a queer kind of simplicity. It was rather as if he were thanking a stranger in a smoking-room for some trouble in passing the matches, than as if he were (as he was) practically thanking the Curator of Kew Gardens for coming with him into a field to find a four-leaved clover. With scarcely a semi-colon after his hearty thanks, the little man began his recital....
More Info
SHARE

Author
Chesterton, G. K
Language
English
e-Book
Show Edition
Digital Items: Available Now
Checkout on Hoopla
Source
Hoopla
Digital Items: Available Now
More InfoCheckout on Hoopla
Description
Read Description
Gilbert Keith Chesterton was an English writer who lived at the turn of the 20th century. His works explored a number of subjects such as philosophy, poetry, journalism, lectures, criticism, and theatrical plays. However, his best-known stories feature the character of an English priest and detective named Father Brown. While the character was based on a real priest who was involved in Chesterton's own conversion of faith, the adventures and mysteries...
More Info
SHARE

7) The Club of Queer Trades

11) The Incredulity of Father Brown

12) The Poet and the Lunatics: Episodes in the Life of Gabriel Gale

Borrow from another library

Didn't find what you need? Items not owned by Darien Library can be requested from other libraries via our interlibrary loan system (ILL).

Catalog made possible by a grant from The Darien Foundation.